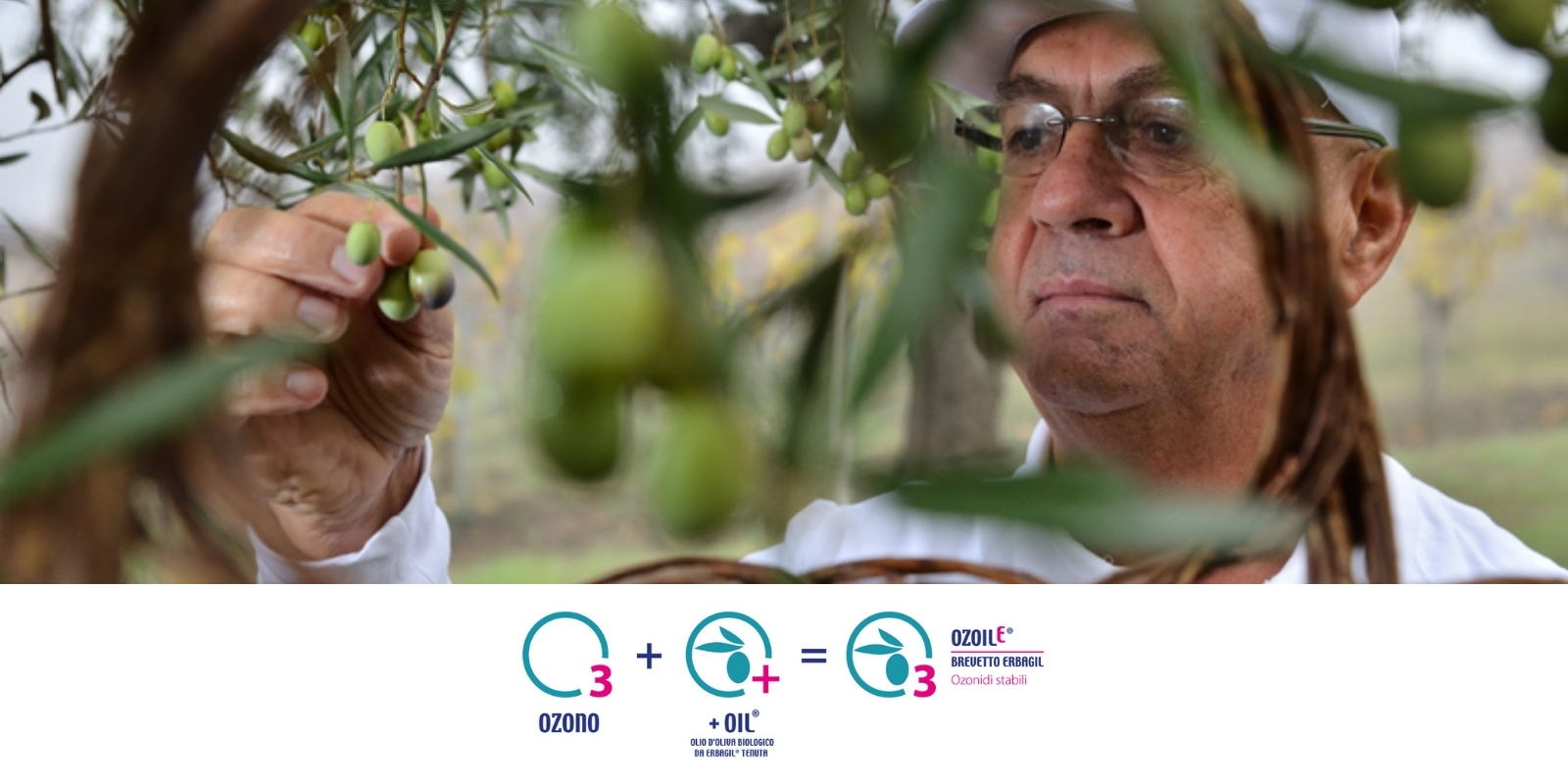 OZOILE® - BIOINDUCER AND MICROBICIDE, WITH REPELLENT AND NOURISHING ACTION (vegetable oil treated with ozone) is a product derived from the treatment of food oil (olive oil and / or sunflower oil) by insufflation with ozone.

Ozone in agriculture can be used in different ways:

Ozone is in fact a powerful biological disinfestant.

Erbagil has always combined love and respect for its land by meticulously following the entire processing process: from the raw material produced by Erbagil Estate, to Erbagil Research prototype up to the creation of exclusive products by Erbagil Production through a process of Green Technology. Erbagil through the OZOGEA® line, enhances and enhances the same raw materials, made available by Mother Earth, processed by Erbagil Research marketed all around the world.

+OIL® IS AN ORGANIC OLIVE OIL WITH ENHANCED ACTION

+ OIL® is obtained from selected olives (partially ripened drupes) from Sannio Ortolana cultivars present in Erbagil® Estate and thanks to the improvement of cultivation, harvesting and extraction techniques, it has a higher content of biologically active components, that give the oil excellent therapeutic properties. ®

+ OIL® (organic olive oil from Erbagil® Estate) has a triglyceride content of 97%.

+ OIL® has a 300% higher unsaponifiable fraction than common oils, and is made up of sterols, triterpenes, polyphenols, alcohols and hydrocarbons.

The biophenols that characterize + OIL® have a high antioxidant power, which helps to strengthen the endogenous defense systems.

There are many advantages of using OZONE in agriculture:

• Elimination of bacteria and microorganisms

• Removal of aphids and phytophagous parasites

• Respect for the environment and living beings

• Reduction in the use of disinfectants

• Increased health and vigor of crops

• Strengthening of the immune defenses of plants 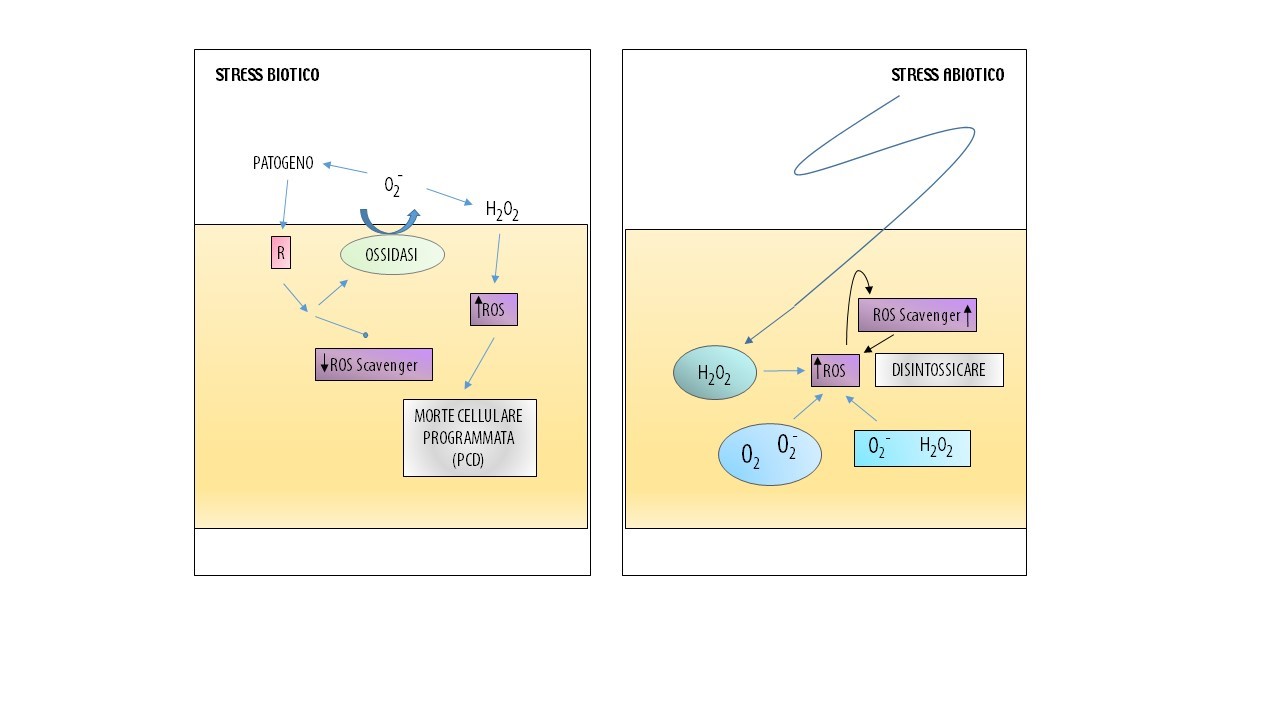 OZOILE® - BIOINDUCER AND MICROBICIDE, WITH REPELLENT AND NOURISHING ACTION, manages to increase the resistance of plants to abiotic and biotic factors through the enhancement of all biochemical processes of the plant: activates secondary metabolites such as enzymes, ROS, ascorbic acid, vitamins, polyphenols, etc., which contribute to the prevention of cellular degenerative processes by increasing significantly the presence of chlorophyll in plants, whose action is comparable to that of the human immune system.

Ozoile® completes the invigorating action of Ozogea® by nourishing the plants deriving from the microelements present in olive oil.

Upon attack by the pathogen, the signaling induced by the receptor activates the plasma membrane and the oxidases located in the apoplasts, that produce superoxide radicals that are highly toxic and can help kill the invading pathogen. On the other hand, 02- is rapidly dismissed into hydrogen peroxide, which, unlike superoxide, can easily cross the plasma membrane. Intracellular ROS levels increase not only due to extracellular ROS production, but also due to the downregulation of ROS elimination mechanisms. Overall, the amounts of ROS increase to critical levels and induce programmed cell death (PCD).

OZOGEA® is a vegetable oil treated with ozone.

OZOGEA® with OZOILE® is included in the list of corroborants for organic farming.

It is a substance of natural origin, not classifiable as a fertilizer and pesticide, capable of improving the responses of plants subjected to biotic and abiotic stress.

The corroborating action of OZOGEA® prevents cellular degenerative processes and significantly increases the presence of chlorophyll. In fact, it is scientifically proven that the good health of trees, flowers and vegetables depends on the presence of chlorophyll; the latter produces energy and oxygen and makes crops healthier, more robust and luxuriant, helping them to develop more vigorously by slowing down the aging process. In case of lack of chlorophyll, plants are more easily attacked by bacteria, viruses and fungi, they are more vulnerable to attacks by parasites and lose their natural green color. Chlorophyll is a bactericide known for its anti-infective properties and is able to regulate the energy functions of plants, flowers and vegetables.

OZOGEA® is composed by vegetable oils treated with ozone, through an exclusive process, patented by Erbagil.

The treatment is recommended both in the early stages of development, to activate the resistance mechanisms and improve the stability of the plant, and in the subsequent phenological stages, to prevent and combat the pathogenic organisms that usually attack crops.

OZOGEA® can be used on any type of crop: fruit plants, horticultural crops, flowers, industrial and cereal crops, lawns.

OZOGEA® does not contain chemical additives and respects the environment.

OZOGEA® does not cause harmful effects on human and animal health, therefore it does not require special precautions for use, it can be used without a mask. The compounds contained in OZOGEA® comply with Article 9 of EC Regulation no. 834/2007 on the prohibition of the use of GMOs. This product is authorized by the MIPAAF (Ministry of Agriculture) and has been included among the corroborants for conventional and biodynamic organic farming.

The benefits of OZOGEA® Corroborant:

• Positive impact on the quality of production

• Greater uptake and absorption of nutrients

• Better aesthetic appearance and greater brightness of the fruit

• Cleaning and drying of honeydew from vegetation

• Safe application for the operator and the environment

7-year-old lemon trees (Citrus limon) belonging to the Interdonato Cultivar were used. The sixth of the plant is 5 m x 5m with a globe-shaped training system. The texture of the soil is medium-textured with a marked aptitude for clay. The treatments performed were the following:

2) Thesis 1 treated once with OZOGEA® Corroborant at a concentration of 3%;

3) Thesis 2 treated twice (1st treatment at T0; 2nd treatment seven days after the first treatment) with OZOGEA® Corroborant at a concentration of 1% for each treatment.

In plants subjected to treatment with 3% OZOGEA® Corroborant (Thesis 1) an increase in the ascorbic acid content is observed already after one week (7 days) from the treatment with a statistically significant increase (p≤0.001) of 40% compared to Untreated. 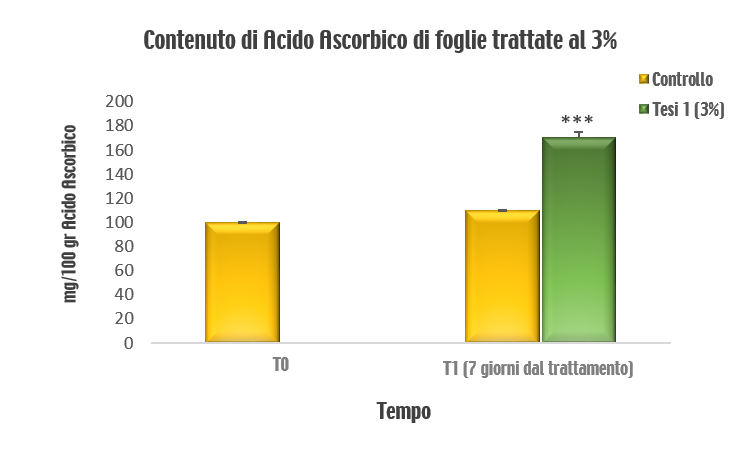 The same trend also occurred in plants treated with 1% OZOGEA® (Thesis 2) where an increase in the ascorbic acid content is observed already after one week from the first treatment, with statistically higher values (p≤0.001) than to Untreated. After 4 hours from the second treatment the ascorbic acid value increases fur ther reaching values of 129 mg/100g. 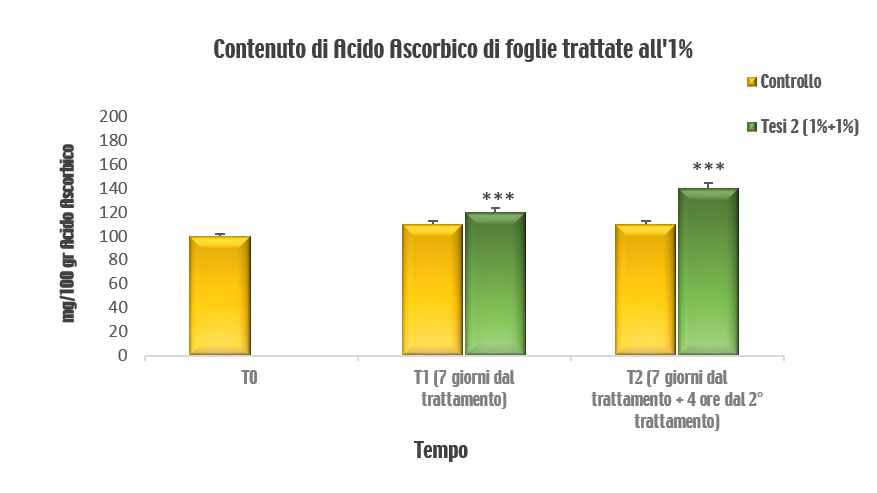 The total polyphenol content determined in lemon leaves Cv. Interdonate in Thesis 1 (3%) is about 338 mg/100g, before treatment. After one week from the treatment, as shown in the figure, there is a statistically significant increase (p≤0.001) of + 8% compared to the Untreated. 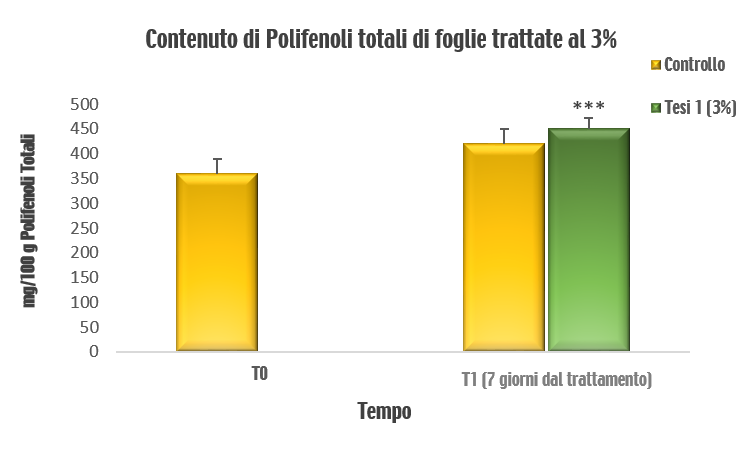 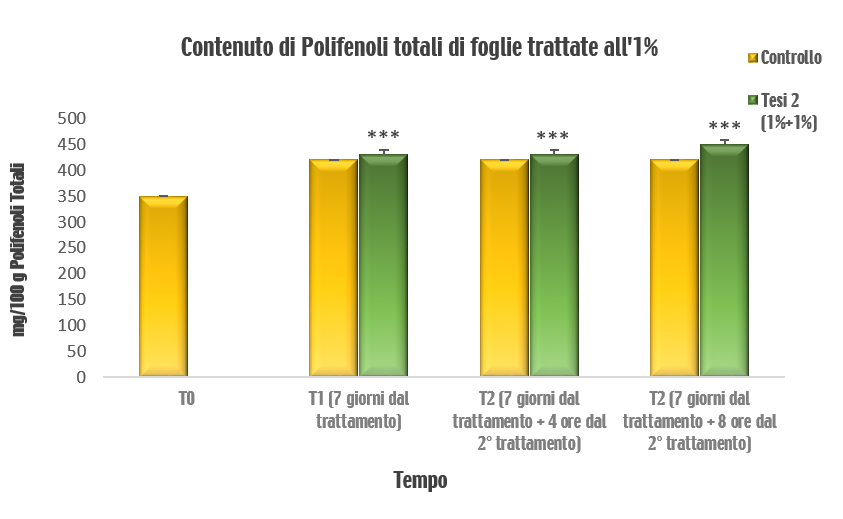 Physico-chemical parameters such as total acidity (AT) and total soluble solids (SST), determined on the juice of the Lemon fruits Cv. Interdonato, they highlighted that the fruits before the treatments had reached an optimal level of ripeness and these parameters did not change after the different treatments carried out. 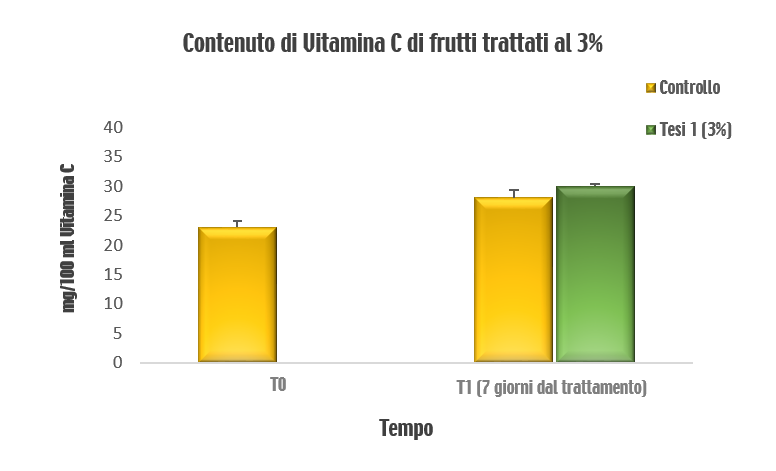 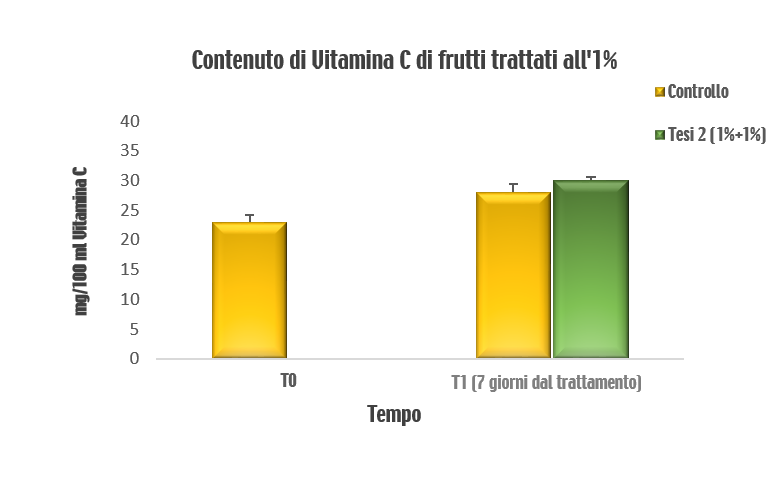 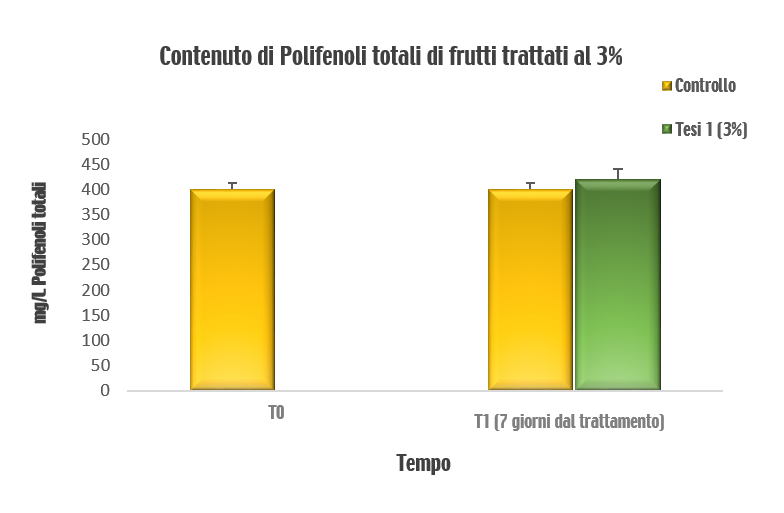 Regarding the 1% treatment, no significant differences were recorded. 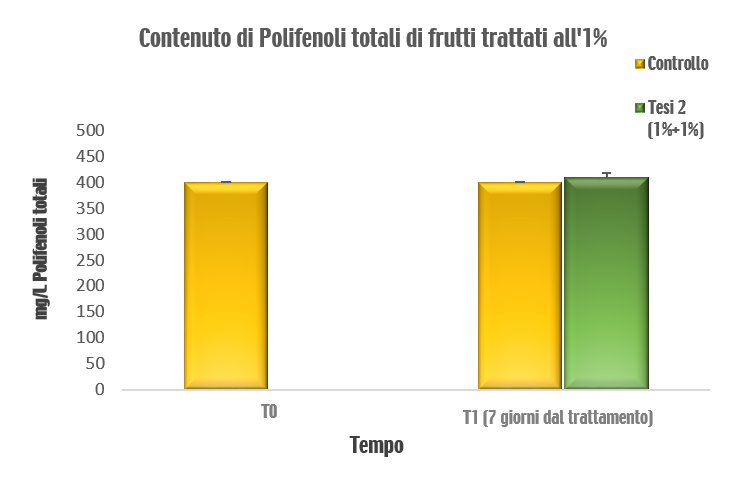 OZOGEA® Corroborant is a substance of natural origin, not classifiable as a fertilizer, potentially able to improve the responses of plants subjected to biotic and abiotic stress. The biological activity of this substance was evaluated by monitoring the content of secondary metabolites in plant tissues and, in particular, the concentrations of polyphenolic compounds and ascorbic acid which represent two particularly reliable indicators of the health of the plant and in particular mode of the defensive potential of the same against biotic and abiotic stress. In fact, the treatment with OZOGEA® stimulated the increase in the content of these secondary metabolites in the leaves and especially in the treated thesis at 3% in a single solution. This increase, recorded more contained also in the leaves of plants treated twice at 1%, can be considered a direct effect of the treatment carried out.

The increase in concentration of these substances was obtained after seven days from the first treatment with significant differences compared to the untreated theses. The positive results obtained for Theses 1 and 2 cannot be attributed to a better nutritional and/or phytosanitary status

of the plants since, as reported in the table, all the theses tested for the SPAD index and for the content in macro, meso and micro- elements did not show significant differences.

As for the processed fruits, the biological activity of the product was not found in Thesis 2 (1% + 1%) suggesting, therefore, a greater efficacy of the product at higher concentrations and a single administration. However, this aspect, although valid for the polyphenol content, cannot be as effective for the Vitamin C content.

In conclusion, considering the positive effects found in the plant tissues studied and the lack of negative effects (burns, drying out, etc.) on the treated plants, OZOGEA® Corroborant can certainly be considered a substance with a corroborating activity.